This procedure does not influence basilemma – the interlayer carrying the epithelial layer and separating it from subcutaneous tissue. Such peel is considered medium-depth.
Anything that penetrates deeper than basilemma is called deep peel. But this does not refer to Jessner peel, a fairly sparing procedure which allows noticeable skin rejuvenation without plastic surgery.

Substantial features of this peel comprise not only removal of horned epidermis to a certain depth, but also active regeneration of skin cells.

The peel was invented by Max Jessner, an American submarine doctor. In truth, he had another purpose: to prepare an antiseptic for mariners and to stop infection spreading among the crew during the voyage. Using what he had at hand, he created a unique solution comprising resorcinol, lactic acid and salicylic acid. Mariners' relatives were stunned to see their fresh, radiant faces. As it happened, doctor Jessner's solution was being used by the crew as an aftershave lotion...
Another name of this procedure is "Hollywood peel": it is extremely popular among cinema stars.

Contraindications are the following:

Warning: for dark-complexioned patients a pre-peel test before the procedure is compulsory.
The peel is performed with care if the patient has demodicosis since aggravation is possible. Jessner peel is also not recommended during spring and summer because of active natural insolation.

Composition and Effects of Jessner Peel

Jessner peel is a 3-component mixture of the following composition: lactic acid, salicylic acid and resorcinol. Sometimes other components like citric or glycolic acid, isopropyl alcohol are added to the solution.

The effect of peel is determined by its active components.
Lactic acid is an alpha-hydroxy acid with exfoliating and whitening effect. It also stimulates the synthesis of collagen, a special protein that makes skin elastic and firm.
Lactic acid is significantly softer and lighter than other fruit acids. This is why it is mainly recommended for delicate skin prone to hyper responsiveness.

Lactic acid has another substantial advantage: a unique ability to bind, retain, evenly distribute and direct moisture into deep layers of skin. This is why addition of lactic acid into Jessner peel solution was a wise decision: it sustains the moisture balance of epidermis.

Jessner peel comprises 14% concentrated lactic acid.
Salicylic acid has a keratolytic, light drying (when sebum is excessive), antiseptic and anti-inflammatory effect. It eases itching and increases epithelization of superficial skin defects. The concentration of salicylic acid in a classic Jessner peel is 14%.
Resorcinol is the third active component of the peel which intensifies the action of the acids. In most cases, peel includes 14% concentrated resorcinol. This component has an antibacterial, styptic, whitening and cauterant effect.

Thus, due to the thoroughly balanced proportions of Jessner peel components, patients are able to get rid of hyperkeratosis and increased skin oiliness, to minimize the number and the depth of wrinkles. The complexion is evened out, skin moisture balance is optimized. The lifting effect of the peel can be compared to the effects of mesotherapy and plastic surgery.

As a result of the peel, skin is renewed and rejuvenated.
Jessner peel is stored in dark glass containers, thoroughly corked, in a cool place, because resorcinol darkens under the sun and in the air.

- Unlike other medium-depth chemical peels, Jessner peel is practically safe in relation to side effects. It leaves no scars or post-peel pigmentation since the aesthetic technician can control the depth of acid penetration and predetermine the result.
- Various peel procedures are possible (superficial, superficial-medium, medium-depth, deep peel) depending on the number of layers applied.
- Jessner peel is ideal for acne prone skin. The quantity of acne is noticeably reduced after several procedures. Post acne scars are treated even more successfully due to the optimally balanced peel composition.
- Post-peel rehabilitation after superficial Jessner peel comprises only a few procedures and soon allows leading customary lifestyle, excluding exposure to sunrays.
- Medium and deep Jessner peel is a perfect alternative to plastic surgery when the first signs of skin aging appear.
- Intensive flaking is observed in practically all cases which, in the opinion of many clients, is a sign of a good result.

- Incorrect and prolonged storage reduces the effect of the solution. It happens because of the complex composition of the peel.
- Resorcinol and salicylic acid are incompatible. They form a fusing mixture and can become toxic.

How is Jessner peel performed?

Depending on the problem, pre-peel treatment prescribed by specialists may vary. It can consist of 2-3 preliminary superficial peels with gradual increase of acid concentration. Or, it can feature home treatment with fruit acids (glycolic, salicylic, mandelic) or retinol.

I stage: pre-peel treatment. It usually means using a special lotion while applying sunscreen in the morning as an essential condition. The duration depends on specific skin problems and is determined by the aesthetician individually.
It should be noticed that for the first procedure, light one-layer peel is recommended. Previously, a skin allergy test is taken: peel solution is applied for five minutes on the unobservable area behind the ear, in 24 hours before the procedure. In case of pronounced redness, itching and puffiness Jessner peel is not recommended.

II stage: peel itself. On the day of peel moisturizers and fruit acid solutions should not be applied. The procedure starts with skin cleansing with a 4.5 to 5.5 pH special solution (using soap is absolutely prohibited). It is applied on face with light massaging, left for 20-30 seconds and rinsed with water.
Then, it is necessary to de-oil skin. After cleaning off grease, peel solution is applied gradually from top downward: forehead and temples; chin; cheeks and nose, and finally eyelids. This may cause a burning sensation. In 2 or 3 minutes skin becomes covered with white crust – salicylic acid crystals. They serve as a peculiar indicator of peel having been applied evenly.

The layering interval is usually up to 5 minutes. Depending on the patient's skin problems, 1 to 4 layers of peel are applied and then neutralized separately. Neutralization takes from several seconds up to 2 minutes. After applying each layer, the aesthetician can assess skin reaction which allows controlling penetration depth and achieving the desired result.
In the end of the procedure, a calming mask and a special moisturizing cream are applied.

The reaction of face skin after peel depends on the number of layers applied.
On the next day after superficial peel puffiness and skin reddening may be observed. During the next 2-3 days, skin will be lightly sloughed off in small flakes. Soon, skin acquires a smooth, even tone, becomes more radiant; pores are narrowed and sebum secretion is minimized.

After deeper peel with several layers of the solution the reaction of skin will be more pronounced: intensive reddening, burning sensation, skin tightness. "Frost", or small white-colored areas, can appear. On the next day after the procedure, skin is covered with a tender pellicle which leaves the face in 3-4 days. Do not try to exfoliate it yourself; this will cause steady unhealthy pink spots. After natural pellicle exfoliation, renewed skin looks fresh, smooth, and firm. Minor defects like pigment spots and wrinkles disappear.

The number of procedures is determined by the cosmetician who considers the initial state of patient's skin and the intensity of the problems that can be solved with the help of Jessner peel.
To achieve a steady and prolonged effect, a course of 6 or 8 procedures is prescribed with 2-week intervals. The first procedure must be sparing; usually one or (maximum) two layers of peel solution are applied. During the next procedures, the number of layers is gradually increased considering individual particularities.
It is necessary to use moisturizing creams and sunscreens. The regeneration process can last for about a week. During this period, exposure to direct sunrays is strictly prohibited.

Visiting sunrooms within a month after Jessner peel is strongly not recommended.
Some cosmeticians recommend to wash the face every day with boiled sour water and then to apply panthenol ointment. It is considered to ease the skin exfoliation process and to support its optimal moisture balance after peel. While washing, fingers should touch the skin gently, in stroking movements without pushing, so that you do not graze the epidermis being sloughed off.

Sometimes, on the next day after the procedure cosmeticians prescribe face sprinkling with thermal water every two hours.

Makeup should not be applied on face within the post-peel rehabilitation period.
Strictly speaking, Jessner peel should be planned out in advance. After peel, the patient should stay at home for a few days, to have both physical and psychological rest and a possibility to take good care of skin by using solutions prescribed by the cosmetician.

The Effect of Jessner Peel

The effect of the procedure will become noticeable in 7-10 days and will last for up to half a year.

Photo before and after procedure 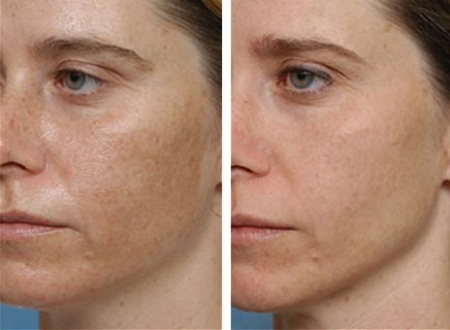 The aim of any peel is to remove the superficial layer of skin cells. Chemical peels, including Jessner peel, result in burning the skin to achieve the subsequent casting-off of the superficial epidermis layer.
Unfortunately, complications after chemical peels are more frequent. They are usually divided into two groups: expected and unexpected.

Expected peel complications are problems that are observed in this or that degree in most cases. They comprise:

- Erythema. Reddening of the treated skin after the procedure. Moderately expressed erythema after Jessner peel remains for up to 48 hours.

- Flaking. Inevitable side effect of the peel. Jessner peel causes large-scaled flaking which is best treated with active moisturizing of skin.

- Puffiness. This is a vascular response of the inflamed skin: its irritation results in the increase in capillary permeability. This appears on the second day after the procedure and remains for up to 72 hours. An experienced cosmetician is bound to consider the patient's individual skin particularities when choosing acid concentration and the number of peel layers. Thanks to it, the intensity of puffiness is significantly reduced.

- Darkening of skin. This disappears in 7-10 days after the flaking subsides.

- Hypersensitivity of skin. This is also normal and natural: after peel, skin becomes tender and vulnerable. In rare cases, it lasts for up to 12 months.
Unexpected, or rare complications after Jessner peel are problems related to infrequent skin responses to the procedure. They can have a negative impact on the aesthetic result of the peel, and in severe cases can even endanger the patient's health.

- Infectious complications: streptoderma, staphyloderma caused by aseptic faults during the procedure. They may require antibiotic treatment with ointments locally and even systemic treatment with pills and injections.

- Herpetic infection. In their acuity, herpetic rashes present a contraindication to Jessner peel. However, having once suffered from herpes, a person usually retains infection in the organism, in nerve knots and fibers. Face is an area with intensified innervation, so stress for the skin (for instance, peel) can "awaken" the cryptogenic infection and provoke rashes. It is necessary to warn the cosmetician in advance if the patient has frequent recurrent herpes; in these cases, the peel procedure requires intake of preventive antiviral medicines.

- Allergy. Jessner peel components have been chosen specifically not to cause allergic reactions. To discard them completely, a preliminary skin test on an unobservable area is recommended. But skin after peel is especially vulnerable, and some exogenous irritants that do not cause specific responses in usual circumstances, can easily provoke strong itching, puffiness, hives. Allergy prone people should think twice whether they need Jessner peel since it may be possible to solve their skin problems with other cosmetological means. Still, if the peel is desired, the cosmetician should recommend taking antiallergic solutions.

Jessner peel should not be performed at home. Without experience and special knowledge of skin structure, patients can inflict wounds and chemical burns upon themselves. This is why it is better to leave your face to professionals and not to economize on your own health and beauty.

Cost can range between $95 to $150, depending on how many layers of Jessner Peel will be applied.