Laser peel (also known as Laser skin resurfacing) is performed on face skin and is known as one of physical rejuvenation techniques. It is based on using monochrome light emission, i.e. one wavelength which affects the tissue resulting in selective photothermolysis. Consequently, one target tissue absorbs over 95% of laser radiation energy and further converts it into heat. As a result, the patient gets selective evaporation of skin layers which removes pigment spots, post acne scars, mimic wrinkles and some other defects of skin cover.

The procedure of Laser skin resurfacing is performed on two types of machines: carbon dioxide or erbium laser.
Carbon dioxide (CO2) laser is used for “hot” laser peel which involves significant tissue heating. This way of peeling is known for a high risk of burns while the rehabilitation period is prolonged. The neck and eyelid areas need special care in this case. Carbon dioxide laser is effective in smoothing stretch marks and scars, as well as in removing new growths on skin cover.

Erbium laser ER: YAG is used for “cold” laser peel which does not include tissue heating. This method of resurfacing is painless and involves no risk of side effects. Erbium laser is safe in treating such delicate skin areas as neck, eyes and décolleté.
Laser peel is also performed on machines combining both technologies in their design. Thus, the effectiveness of the procedure is increased simultaneously with its safety.

Machines for laser peel ensure accurate control of laser radiation power and, accordingly, the depth of its penetration – from the upper epidermis layer to derma. This guarantees the necessary accuracy of removing dead cells. With its horned layer removed, skin activates the regeneration mechanism which leads to its rejuvenation and significant improvement of appearance.

There are three degrees of laser skin affection: superficial, deep, and laser surgery of cicatrical tissue. Superficial affection, or actual laser peel, does not damage the basilemma and can be “cold” (ablation without coagulation) or “hot” (ablation with coagulation). Superficial affection also comprises aesthetic resurfacing (ablation with coagulation). Since basal keratinocytes are not damaged, the wound surface regenerates fast and qualitatively which minimizes the rehabilitation period. The process of regenerating epidermis in this case is accompanied by accelerated keratinocyte proliferation. Due to preservation of keratinocyte basal layer, the process of natural melanogenesis is undisturbed. This excludes hyper and hypo pigmentation in the post-operation period.

The difference between laser peel and aesthetic resurfacing lies in the depth of affection. For laser peel, it amounts to 20-30 micrometers and allows improving skin's optic properties, smoothing the thickness of the horned layer in epidermis and neurohumoral stimulating of keratinocytes active proliferation. For aesthetic resurfacing, the depth of superficial affection amounts to 100-150 micrometers (depending on the occurrence depth of the basilemma) which ensures ablation of epidermis and smoothing of skin cover.

Among contraindications there are inflammatory processes on skin, its predisposition to keloid scars, aggravation of chronic diseases, herpes, epilepsy, diabetes, oncology diseases, earlier blood strokes, tuberculosis, blood diseases and usage of cardio stimulator. Laser peel is absolutely not recommended during pregnancy or breast-feeding, as well as one week after standard face cleansing or two weeks after deep chemical peel. Suntan is prohibited within two weeks before laser peel, steam face cleansing – within three days before the procedure.

Advantages and Drawbacks of Laser Peel

The penetration of laser beam to the depth of 1-20 micrometers (“cold” resurfacing) leads to momentary evaporation of liquid from the tissue structure. In this case, heat does not arrive to deep subdermal layers and does not burn the skin. Repeated treatment of the same skin areas does not cause increased necrosis of tissues, and the risk of possible complications is minimized.
Drawbacks of the procedure include higher price in comparison with other types of peel, as well as limited penetration depth of laser beam which does not allow removing deep pigment spots and deep wrinkles. Plus, there is a possibility of painful sensations during the procedure.

The Procedure of Laser Peel

Immediately before Laser skin resurfacing skin should be prepared. Firstly, it should be thoroughly cleansed. It is accomplished by washing the face with mild gel and further treating it with soothing lotion. Secondly, local anesthesia is needed. At that, if the patient had earlier allergic responses, it is necessary to take antihistamines. Thirdly, anesthetic cream is applied evenly on the treated skin areas under occlusion. After 30-60 minutes cream is removed and the face is treated with special lotion.

Before the procedure the cosmetician and the patient put on protective eyewear. The process of laser peel itself takes on the average 20-30 minutes. Laser beam is directed at the problem-prone areas of skin and causes their thermal injuries of certain degree. This leads to accelerated epithelization and may cause a few side effects. Varied radiation power can remove 15-20 micrometers of tissue. Optimal procedure parameters depend on the individual properties of patients' skin cover and can vary by adjusting the following parameters of laser machines: power of energy flow, size of light spot, burst duration and quality.

With all manipulations completed, skin surface is treated with soothing cream, and in some cases – with special soaking therapy. After this, moisturizing cream is applied. In rare cases, one may observe reddening, puffiness, flaking and discomfort which subside within 48 hours. To get rid of side effects faster, cold compress and water-based moisturizing ointments are used. Cosmetics and creams may be applied on the following day after the procedure. It is also necessary to use sunscreen with SPF higher than 40.
Laser peel is performed in course from 2 to 8 procedures with monthly intervals.

State of Skin During and After Laser Peel

During the procedure most patients feel nothing but warmth. Only a few experience discomfort and painful sensations which are treated and minimized with anesthetic cream.
Immediately after the procedure face skin acquires a reddish tint which turns into a light pink hue in two days. In some cases slight puffiness, hyperemia or crust may be observed, but these responses subside within two weeks. Skin flaking is minimal, and this is another advantage of laser peel.

The Result and Effect of the Procedure

The start of skin cover regeneration is guaranteed when derma and epidermis are photothermally damaged simultaneously. In consequence, new collagen fibers between these skin layers are reorganized linearly. When this area thickens, distinctive signs of aging appear. This also weakens trophic links and slows down the metabolism in epidermis, thus increasing skin sensitivity to shear load and resulting in tissue damage. Partial regeneration of basilemma thanks to laser skin resurfacing helps in smoothing wrinkles and other defects due to the stable rejuvenating effect of the procedure.
Basic complications of laser peel include hyperemia and puffiness which subside by themselves within a week. Inflammatory complications demand usage of anti-inflammatory, antiviral and antibiotic solutions.

Photo before and after Laser Peel 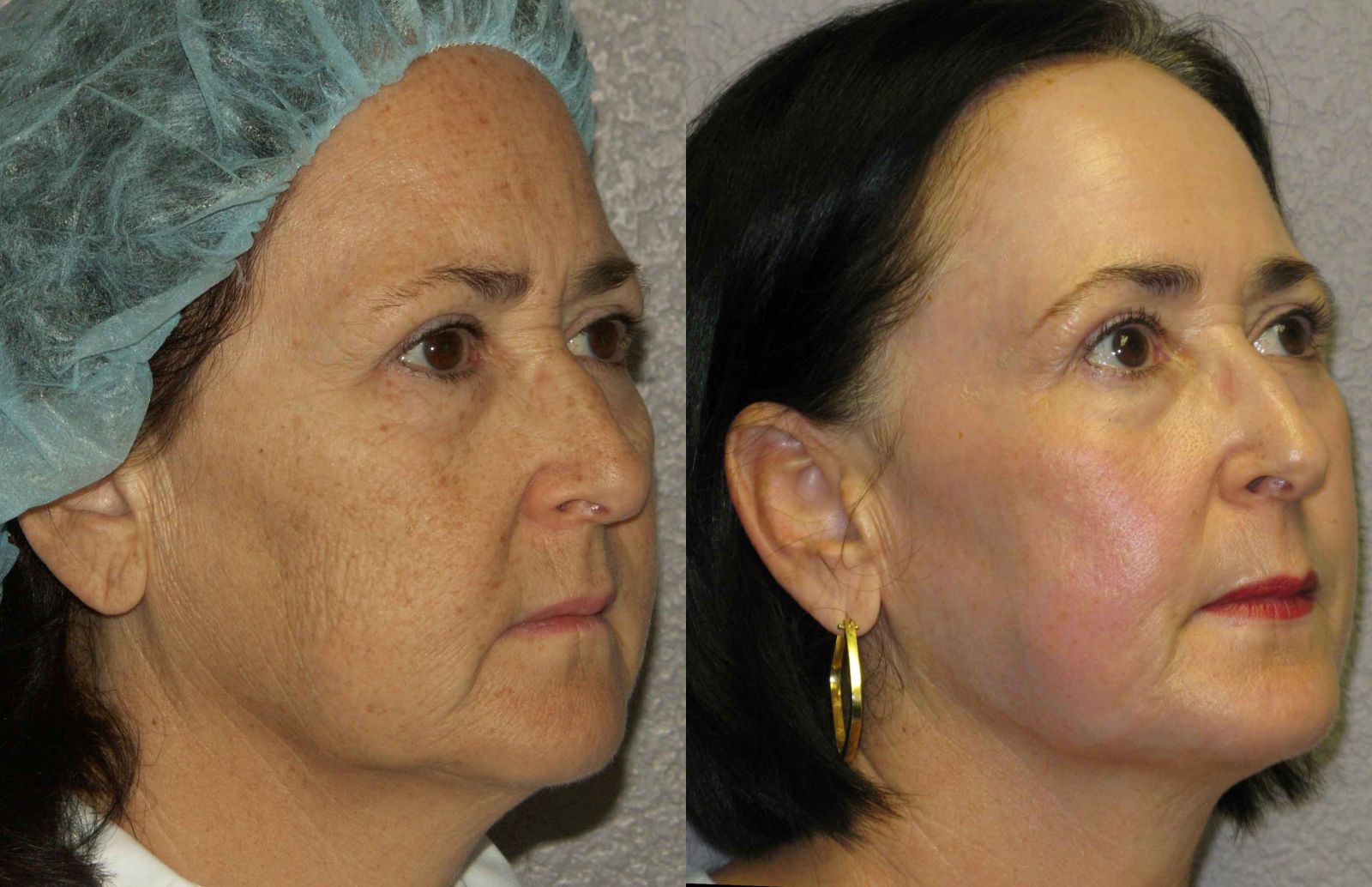 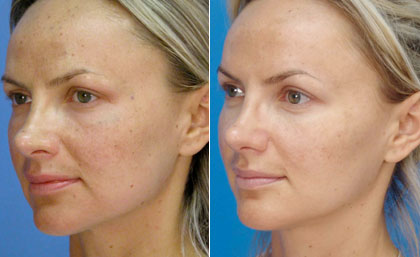 The average total cost for a laser skin resurfacing procedure varies between $800 to $8,000, depending on the geographical area, the depth of the procedure, the number of treatment sessions required, and the size of the area(s) being treated. The U.S. average is around $2,500, which includes not only the surgeon’s fee, but also pre- and post-operative care and medications.

Skin resurfacing is usually not covered by insurance unless it is being performed to treat precancerous skin conditions or improve scars from a previous reconstructive procedure or trauma.